skip to main | skip to sidebar

Playing Zen Flutes on the Moon in Bish-Town

So I have now rolled back into Bishop with good friends Nic & Dom from the Inland Empire. We rolled up in the Five Ten van and upon arriving checked in with friends Jon and Mike to stay in town and enjoy the pleasure of space-heaters.
The next day you took a little whirl up my favorite warm-up ever, 'The Dome 5.8?'. Then I put my first efforts on 'The Mandala V12'. I found the moves to be much more managable than I had expected and see this as a reality. Truely an amazing boulder although incredible sharp. Then I went with some friend to the cave boulder and quikly dispatched the 'Moon Raker V9'in a couple goes. I found that problem to be super radical with amazing movement.
I heard dear some dear friends of mine South Africa were in the 'Milks as well and then set out looking for them. Then I met up Alana and Scott which of course was a total pleasure and trip all at once.
The next day Nic, Dom and myself headed back to the 'Milks. After a Warm-up solo on the dome I headed over to Dales Camp and was able to quikly finish an absolute incredible boulder 'Zen Flute V10' that finishes with an all points off dyno. So so sooooo good.
Some other nice boulders that I have climbed in the last couple of days are 'Disco Diva V8'& 'Get Carter V8' and in the icy super cold conditions of today I ripped of the last move of 'Toxic Avenger V10' with blood spraying from my right hand. It is very cold and staying psyched is easy but keeping the body in good shape is something else all together. So there is the whirlwind of recent activity and with Hueco on the horizon life is very cold but oh so good!!
AR
Posted by anderrock at 5:56 PM 1 comment:

If you are anywhere amongst the west coast of the united states you are aware that weather has been an issue if you like climbing rocks. Huge weather systems seem to be coming in from the Pacific. Bishop was no exception.
Prior to the storm we had a few small windows of climbable weather. I was able to make quick work of some great problems like 'Soul Slinger V9', 'Freeze Short V9' in two tries, and the 'Croft Problem V8'. I also tried an amazing problem, 'Zen Flute V10', that was originally put up by Sharma. This climb came so so close a to a one day ascent but because it is so amazing and classic I am just as psyched to head back.
I headed down to the Inland Empire with good friend Dominique in an effort to change the scene as the storm of impending doom was sitting on our doorstep, or tail-gate as it would be for me. I have been able to catch up with amazing people and great friends from the road. I have seen and will continue to check out the gym climbing scene as the weather seems to be unrelenting. I have been able to gain some accounts for A-Balm and stop by to meet the gang at Five Ten in Redlands.
It seems like true happiness in climbing on the road is more about the ability to adapt than to follow plans and this has been just another great chapter. Hope everyone has been able to adapt to the weather and stay psyched.
AR
PS-I have added a few images. The First is me sending "Pine Box V11/12". The Second is myself on 'Thriller V10'. The third is me sending an amazing V8 in Ibex that I was reminded of recently. 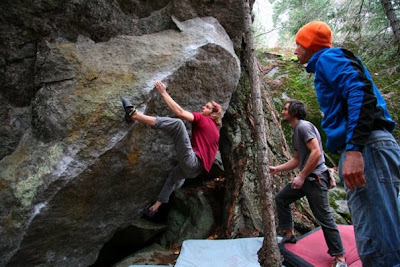 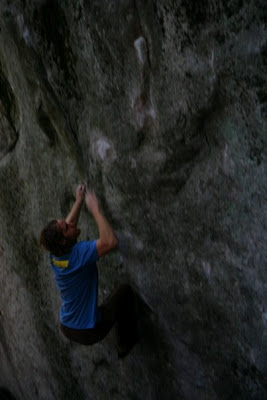 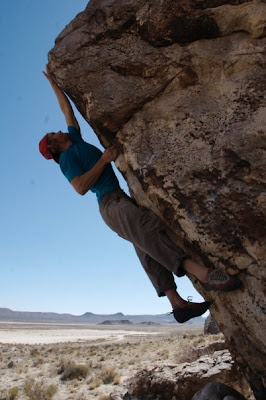 So I have made it to Bishop but much more has happened as the title implies. I am still recoverying from some 'knock you on yo ass' bug that I picked up in the valley so hopefully I can put that on my shedded list soon. Turns out being sick messes with ones climbing...hmmm woulda guessed. Despite the heat that has been hitting Bishop I have managed a couple nice boulders. 'Brian's Project V9','Rave V7' and some rad patina V7. All went very quikley, within a few goes for all.
Before I left I shaved my head on very long hair in an attempt to draw a close to the past and begin this new leg as just that, new. I now reside in the bed of GMC truck and am hopefully awaiting some healthier times and cooler temps. Love to all. Ciau
AR
Posted by anderrock at 6:04 PM No comments:

anderrock
I am a lover, not a fighter and I climb rocks. I happily live everywhere and no-where and hope to see you out there. Let me know if you need the beta.